Sometimes, while driving, one comes to an intersection with lots of signs, many lanes, and a maybe a few traffic lights as well. Trying to discern whether you have the right of way is a difficult feat in the handful of seconds in which one has to make that decision. Perhaps, like above, everyone has to simultaneously try and figure out which road goes where. Other times, the below happens. In these cases, you make your best guess and just go for it. Unfortunately, all too often another driver guesses differently and you end up three inches into his or her rear bumper — or worse. 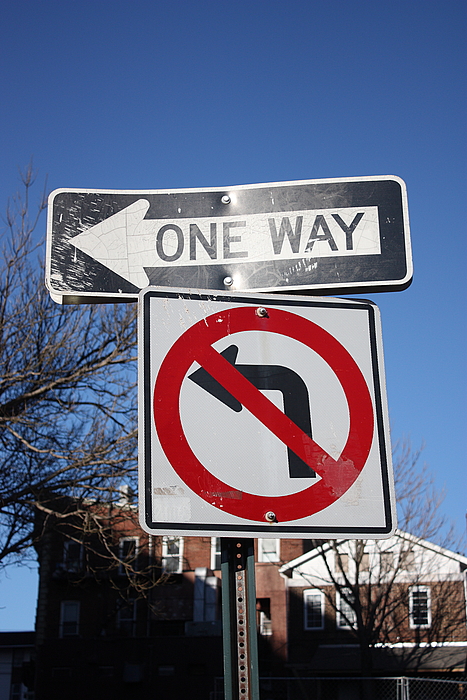 And the solution of urban planners and traffic experts: add even more signs.

The late Hans Monderman thought this was at times backward, so he undid it. His theory: get rid of all the signs. Let drivers, pedestrians, and cyclists figure it out themselves.

If you’ve ever walked through a crowded area (the subway station in Manhattan’s Times Square comes to mind; here’s a stop-motion Vine I once made), you’ll find that almost everyone is able to navigate large, open spaces without slamming one another to the ground. It’s clear that our brains are able to negotiate crowded areas with lots of people going different directions at different speeds. Monderman applied that to traffic. “A wide road with a lot of signs is telling a story,” he told Wired. “It’s saying, go ahead, don’t worry, go as fast as you want, there’s no need to pay attention to your surroundings.” The relatively chaotic-feeling of places like the Times Square subway station (Monderman didn’t use that example himself, but the point holds) require that people pay attention and figure out how to get from A to B without crashing into C, D, and E. So Monderman decided to see what happens when you do the same for roadways.

One of Monderman’s first real-life tests was a traffic circle in Drachten, Netherlands, seen before and after, below (via Streetsblog). Note the large number of lane markings, traffic lights, signs, and other signals in the first photo, and how almost all of them are gone in the second. There aren’t even full crosswalks. 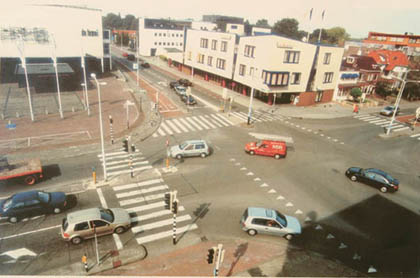 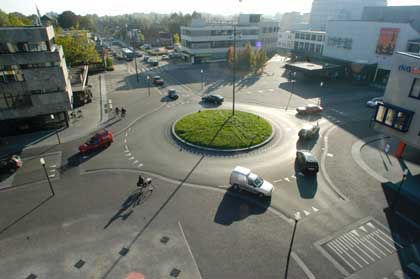 As Wilson Quarterly summarized, the experiment was successful:

The results were striking. Without bumps or flashing warning signs, drivers slowed, so much so that Monderman’s radar gun couldn’t even register their speeds. Rather than clarity and segregation, he had created confusion and ambiguity. Unsure of what space belonged to them, drivers became more accommodating. Rather than give drivers a simple behavioral mandate—say, a speed limit sign or a speed bump—he had, through the new road design, subtly suggested the proper course of action.

Monderman’s model, called “shared spaces,” has been shown to reduce traffic accidents and, ultimately, save lives. Wilson Quarterly notes that even though use of Drachten traffic circle increased by a third after the remodeling, congestion decreased and there were half as many traffic accidents. This was in spite of the fact — or, as Monderman argued, because of the fact — that everyone seemed scared of the intersection: “Despite the measurable increase in safety, [both drivers and cyclists] perceived the place to be more dangerous.” As Monderman argued, that’s because those entering the intersection were forced to slow down and think before hurtling off into traffic.

Many others have copied the Dracten model to varying degrees, with similar results. The city of Carmel, Indiana, for example, has about 60 roundabouts, if not more (and only 80,000 or so residents). Since the 1990s, the town has been replacing traffic lights with rotaries, with excellent (albeit self-reported) results: “where roundabouts have replaced signals or stop signs at intersections, the number of injury accidents has been reduced by about 80 percent and the number of accidents overall by about 40 percent.”

Monderman, who passed away a few years ago, likely saved many lives by simply requiring that we pay attention when behind the wheel.

Bonus Fact: The most famous crosswalk in the world may be the one at Abbey Road in London, due to the iconic Beatles album depicting the band crossing the street there. If you want to watch people use the crosswalk, you can — there’s a 24/7 webcam focused on it, here.